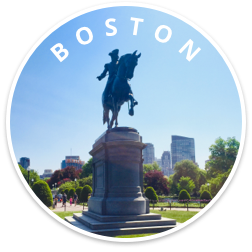 One of the oldest cities in the US, the city played a key role in the American Revolution. A historic area dedicated to preserving the history and culture of the African American community. The oldest standing church in Boston, it was used to warn the colonists of the British Army. This 1729 meeting house was used to debate the rules and regulations passed by British Parliament. It was here that the Declaration of Independence was read on July 18, 1776. The Battle of Bunker Hill

A famous battle during the American Revolutionary War in June of 1775. Protesting taxes, the Sons of Liberty threw 342 chests of tea into Boston Harbor. Home to the famous silversmith and Midnight Rider who warned citizens that the British were coming. The oldest warship on the water today, the ship was built in 1797 to help fight against pirates.