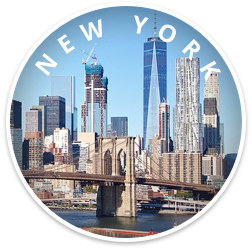 Founded in 1624, it's one of the busiest cities in the world with over 8 million people. A historic monument to the over 400 Africans buried nearby in the 17th century. Enjoy the beauty and activities happening at the most visited urban park in the United States. Take in the site of this Art Deco skyscraper that was the world's tallest building in 1930. Once the busiest immigration station in the US, almost 12 million migrants arrived through this port. The famous skyscraper was the tallest building in the world from 1930 to 1970.

It was at this location that George Washington was sworn in as the nation’s first president. This steel framed building shaped like an iron was the tallest in New York city in 1902. A memorial to those killed in the 9/11 attacks and World Trade Center bombing in 1993. This Neo Gothic Roman Catholic Cathedral dates back to 1858. A symbol of freedom, and a welcoming beacon to immigrants arriving to America in the early 1900’s. Surrounded by billboards and brightly lit advertisements this commercial intersection is a favorite for tourists. Located in Lower Manhattan, it’s one of the best known parks in New York City.