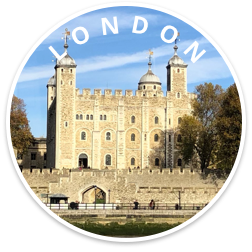 Founded by Romans, the city is one of the most powerful and important cities in the world. This 150+ year old tower holds the world's most famous bell. The first public national museum in the world with a collection of over 8 millions works. The home and headquarters for the monarch of the United Kingdom. Commissioned in 1939, Belfast saw extensive duty during the Second World War, including the Normandy invasion. An observatory that sits on the Prime Meridian, marking Greenwich Mean Time. This enormous white cathedral is one of the tallest buildings in London. A beautiful, iconic suspension bridge spanning across the River Thames. This 10th century church as been used for royal coronations since the 1066.