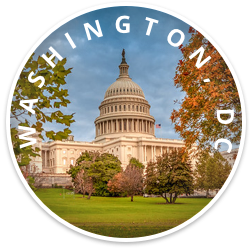 Founded after the American Revolution, it's now the capital of the US. The famous theatre where President Abraham Lincoln was assassinated in 1865. The national library of the United States and the research library for Congress. A memorial built to honor Thomas Jefferson and the Founding Fathers of the United States. The meeting place for the Unites States Congress and the Senate. Completed in 1884, the 554-foot tall obelisk is a memorial to former general and president, George Washington. The second largest church in the US, it has witnessed 3 presidential funerals. The home and office of the President of the United States.