Over 200 years ago, before the United States of America became an independent nation, England ruled Massachusetts. British Parliament had recently passed the Tea Act to save the East India Company from going into Bankruptcy. The act would make tea cheaper for the colonies but it left a previous tax in place that only the colonists would have to pay.

To them, it was another example of how they were being taxed unfairly.

If they were going to be taxed, then they wanted representation within the British government.

Their frustration grew and so did the tension until one day that frustration led to a party, but not the kind you're used to. This party ended with 342 chest of tea being dumped into Boston Harbor and soon a war would follow.

The Story
It was December 16, 1773. Just a few weeks earlier the Sons of Liberty demanded that 3 ships carrying tea to Boston return home to England. If they were going to be taxed on the tea, then they didn't want it.

The governor of Massachusetts disagreed.

He had given the ships' captains 2 weeks to unload their cargo. Now, it was the final day of his demand. 5000 colonists piled into the Old South Meeting House to protest. As you can imagine, a meeting with this many angry people did not go well.

People began to leave the meeting hall to plan further protests. A group of 116 men - led by the Sons of Liberty - went down to the harbor where the 3 ships were docked.

They climbed on board and began unloading the tea...right into the water.

Afterwards, many of the men left the state to avoid punishment. The British Parliament, already frustrated with the colonists behavior, wanted to send a message. They shut down business in Boston and enacted several laws called the Intolerable Acts to show off their power and put an end to the colonial resistance.

In fact, it made things worse.

The colonists viewed the acts as a violation against the rights of Massachusetts. Instead of complying with the new laws, the Constitutional Congress was created to protest them. A few months later, in April 1775, the American Revolution would begin...and from there, a new nation would soon be born. 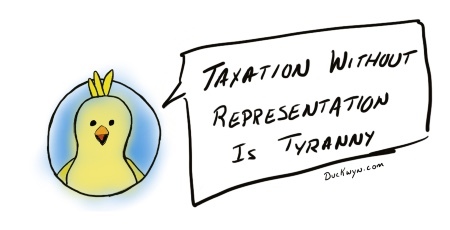 The names of the 3 ships were the Dartmouth, the Beaver, and the Eleanor.

Turn your family vacation into an adventure. Engage your kids in the rich world history.

Get them a Duckwyn passport and start collecting virtual stamps and stickers from the places you go.

These hours can change. Please check the web site before making your plans.